There is not much that I love more than cinnamon rolls. Except maybe pumpkin. Add the two together and you get these vegan pumpkin cinnamon rolls! Eating them is like being in a fluffy dessert heaven. 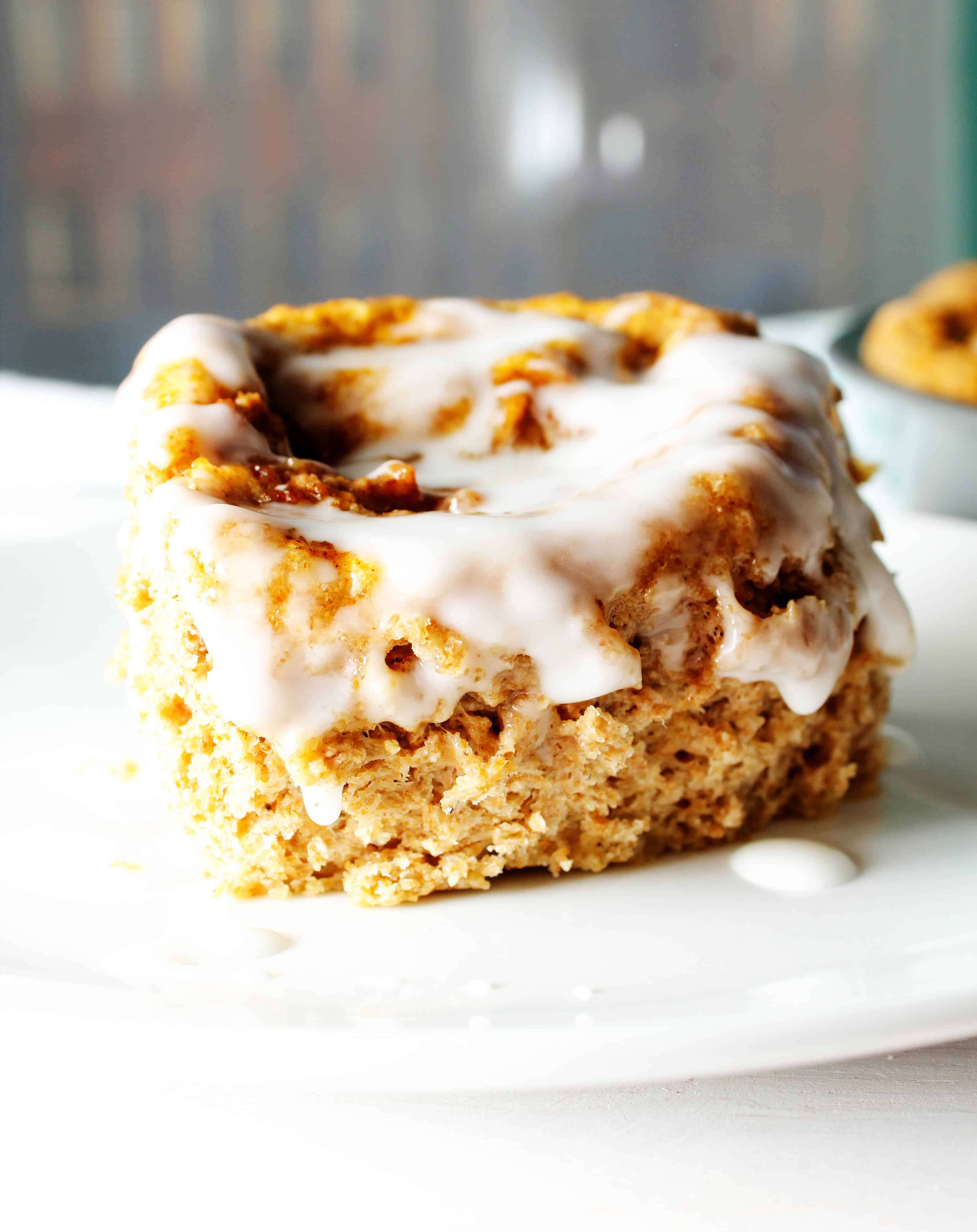 If I could eat one dessert for the rest of my life, it just might be cinnamon rolls. The sweet, gooey, fluffiness is the perfect combination of everything I love in a dessert. But, making them has never been my specialty. Without yeast, they just didn’t have that pillowiness. With yeast, well, I’m not sure because I could never get the yeast to work!

In all my years of existence I have never been able to get yeast to cooperate with me. I would follow the directions – proof the yeast, knead the dough, allow said dough to “rise”. But that darn rise would never happen. Until now! Getting the yeast ro work is seriously one of the biggest accomplishments of my life. And now we can all enjoy these healthy, scrumptious pumpkin cinnamon rolls because if I can get it to work, you can, too! 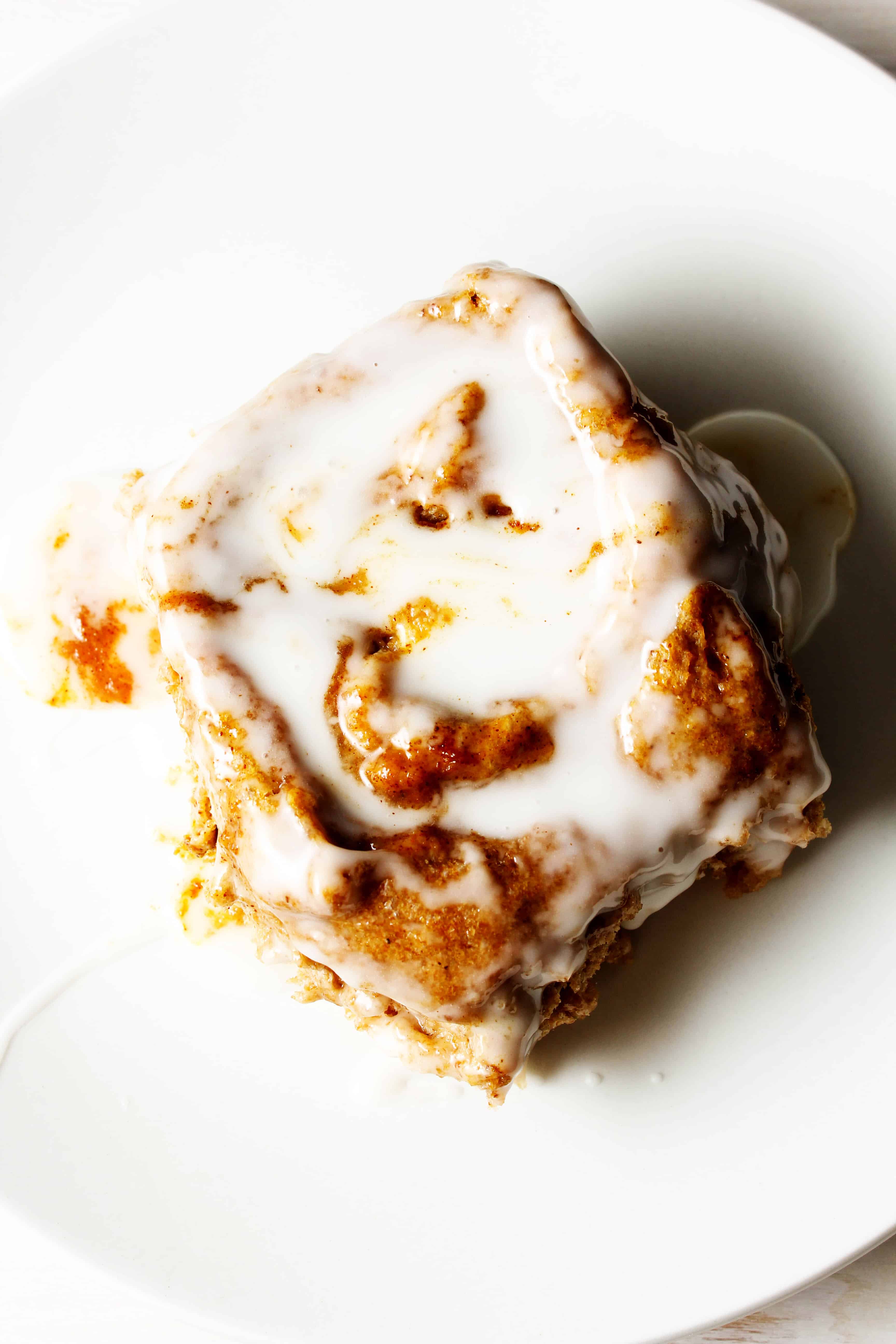 I learned that the trick with yeast is that the temperature of the liquid matters (insert head explosion motion here)! This might be obvious for some of you, but I’m positive in my previous attempts to make cinnamon rolls I’ve used water straight from the tap. The temp of the water has to be about 110 degree F. But, I don’t own a thermometer and am lacking the “type A”/meticulous gene to actually buy and use one. If you are like me, no worries! The trick here is to warm your water up to the point where if you stick your finger in it, it doesn’t feel hot or cold. Basically, you shouldn’t be able to tell your finger is in water. Well, besides it being wet and all…. Anyways, this method has worked every time now! 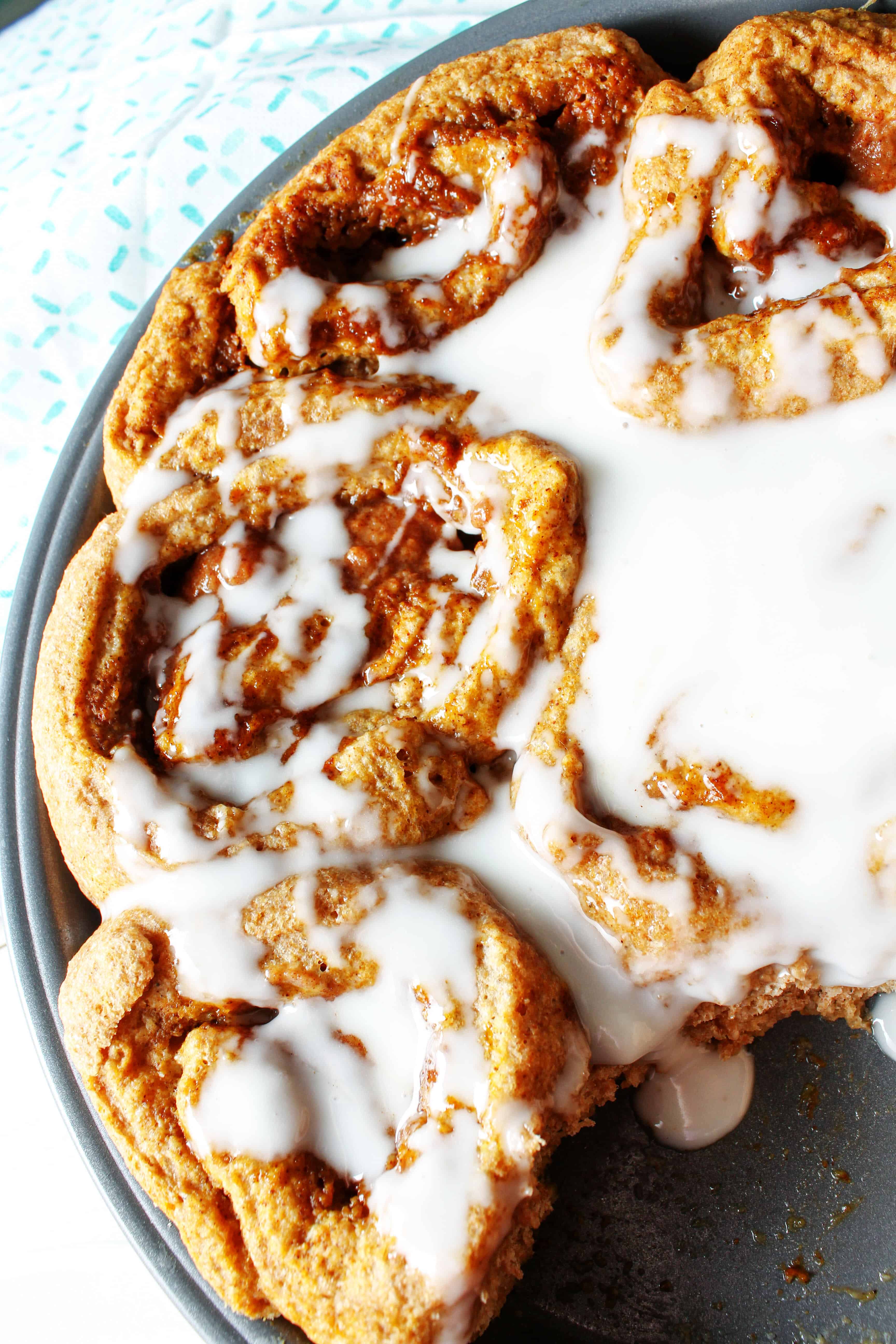 Once you get the water to the correct temperature,  just add 1 tsp of sugar and sprinkle the yeast on top. VIOLA! Five minutes later your yeast is all….well, yeasty. It has a distinct smell and will be foamy and bubbly.

Then, you just mix that foamy yeast in with the rest of your ingredients and knead away. I know some people avoid recipes that require kneading like the plague, but if you put some parchment paper down, you can knead the dough on that instead of creating a snow store of flour on your counter. 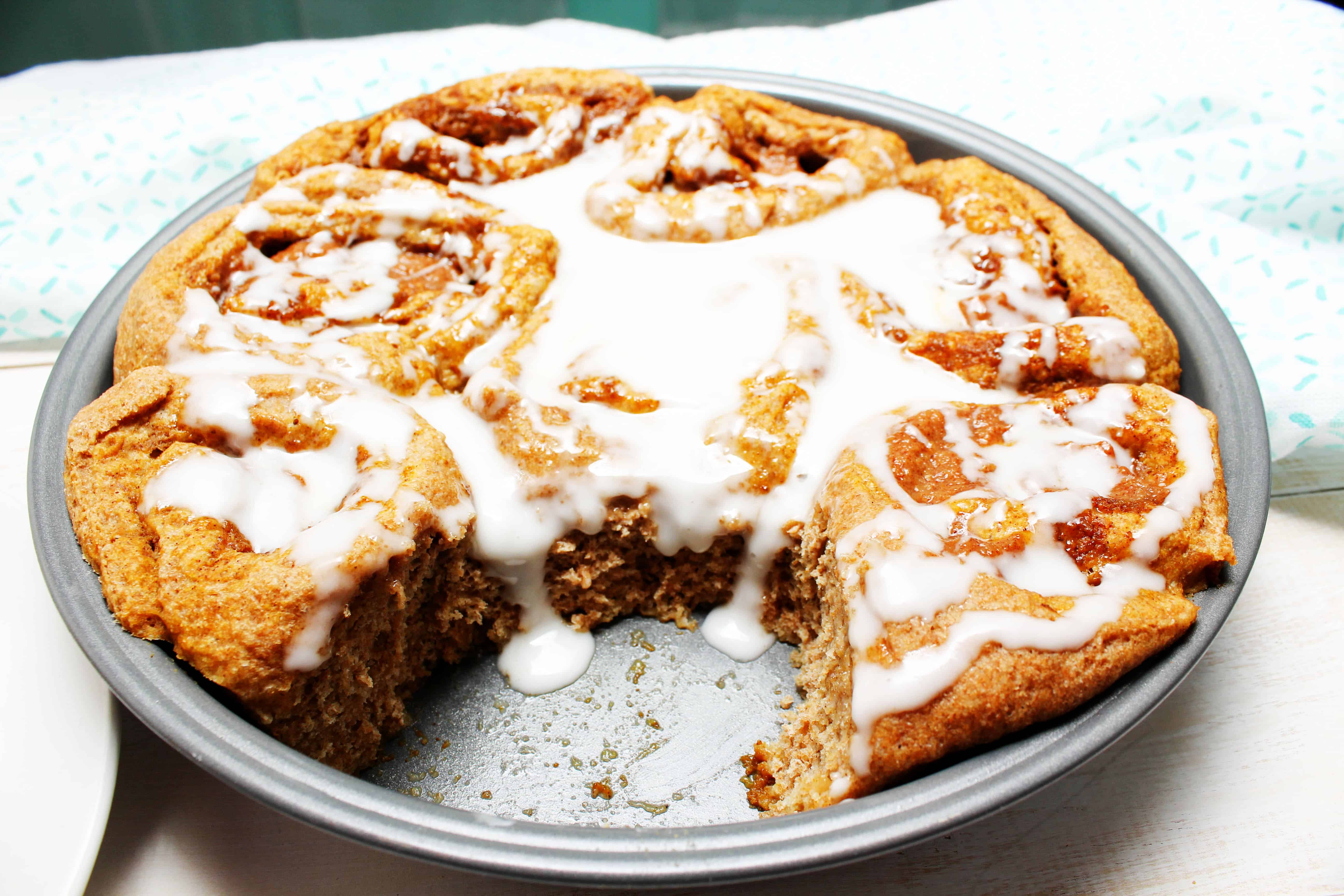 Here’s another important trick when working with yeast – it has to be left alone to rise in a wam, draft free place. I covered my bowl with some cling form and stuck it in my microwave, with the microwave off. When I checked on it 2 hours later, and the dough had actually doubled in size, my reaction was like a kid at Christmas who was just told they were going to Disney World!

And here’s another crazy thing – rolling up the cinnamon rolls is actually really fun when your dough is light and fluffy instead of dry and crumbly. Which, if you’ve ever failed at making cinnamon rolls (like I have), you know exactly what I’m talking about. 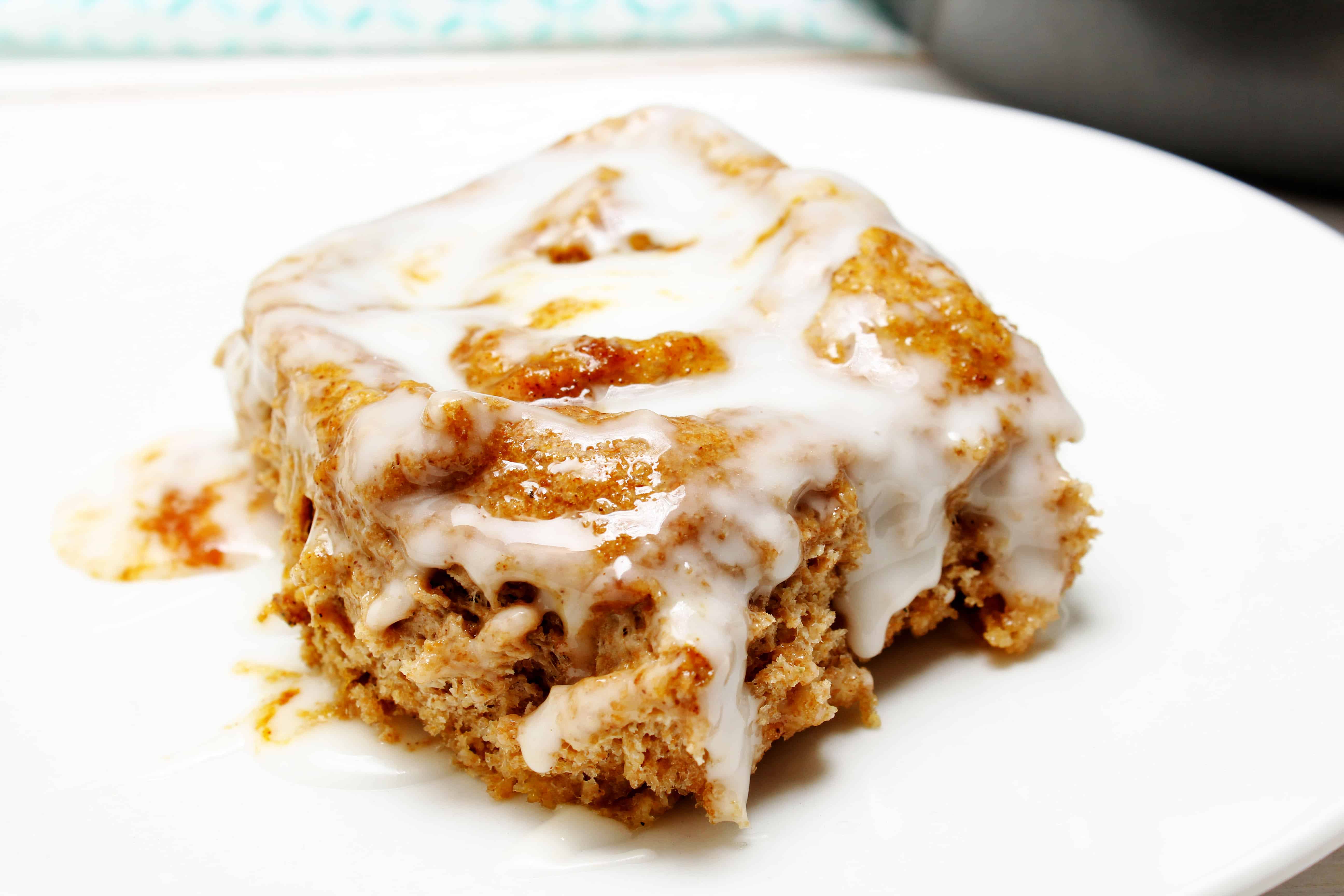 After you’ve rolled up and sliced your pumpkin cinnamon rolls, you get to set them aside to rise again! It’s just as exciting as the first time 😀 . And once you get to baking them…oh-em-geeeee! The smell that will take over your house will make it hard to wait for them to finish baking!

I seriously can’t get enough of these. Not to mention they are made with healthy ingredients, like whole wheat flour, almond butter, and of course, pumpkin. Lots of fiber and no saturated fats! That’s my kind of dessert. Also, don’t get scared by the recipe’s lengthy instructions. I wanted to make sure I was thorough. So, what are you waiting for!? These vegan pumpkin cinnamon rolls aren’t going to bake themselves. 😀 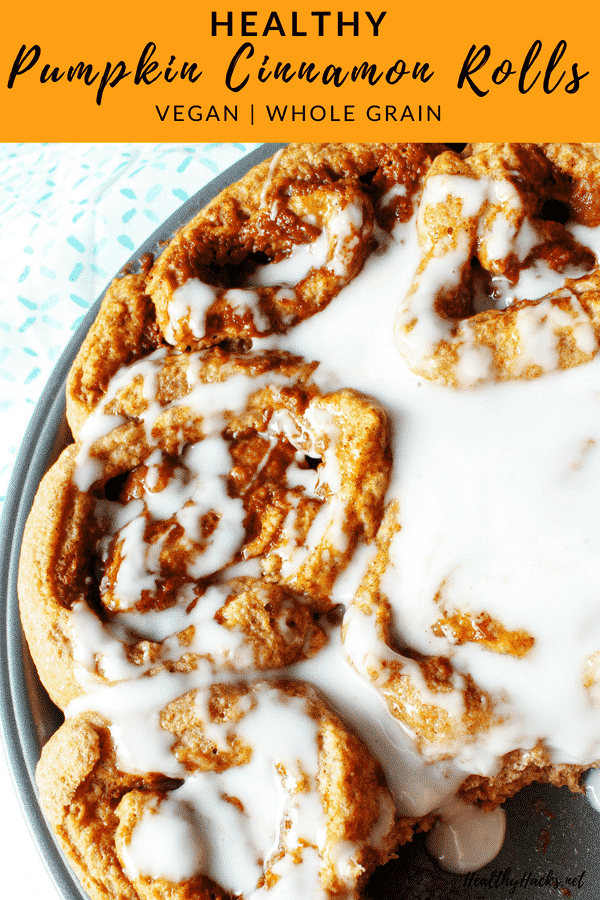 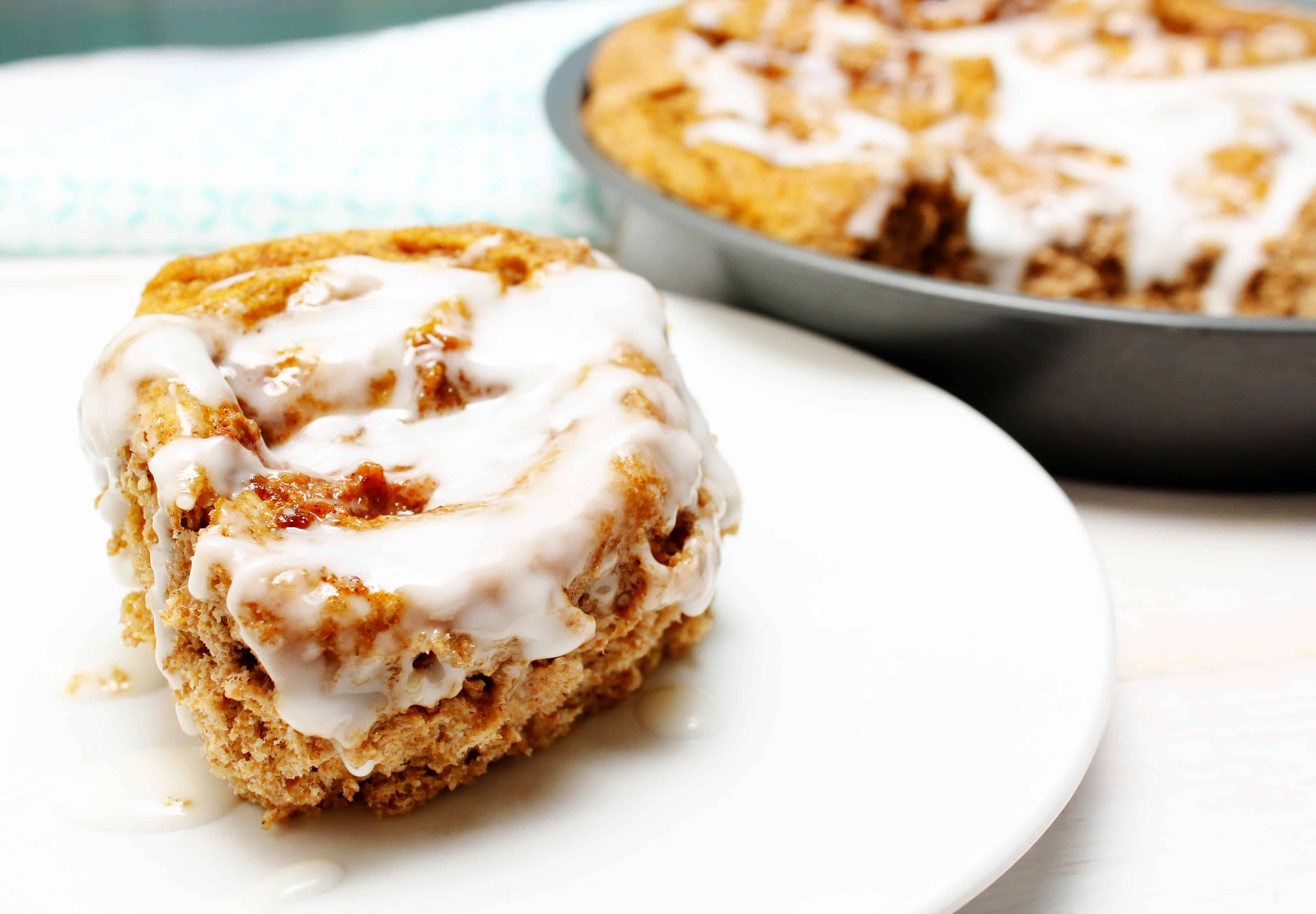 Dough
Filling
Glaze
Or, if you'd like a vegan cream cheese, you can find a recipe on the Healthy Vegan Carrot Cake recipe page.

Prep time does not include rising time. 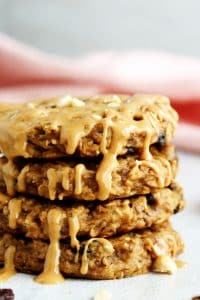 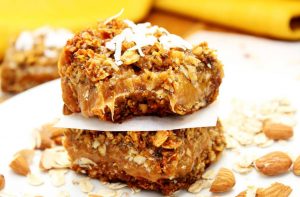 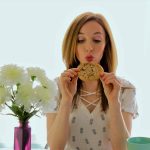 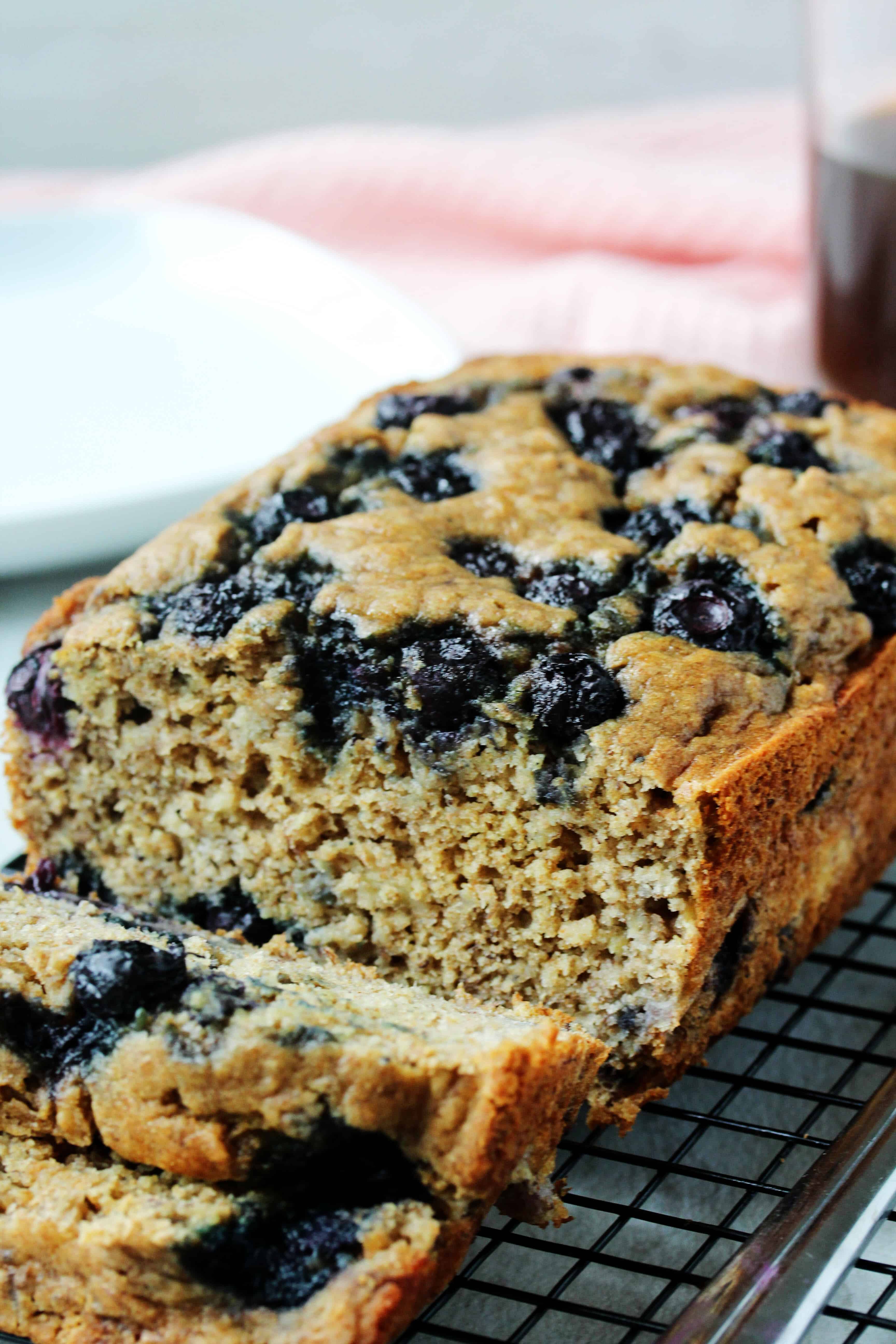 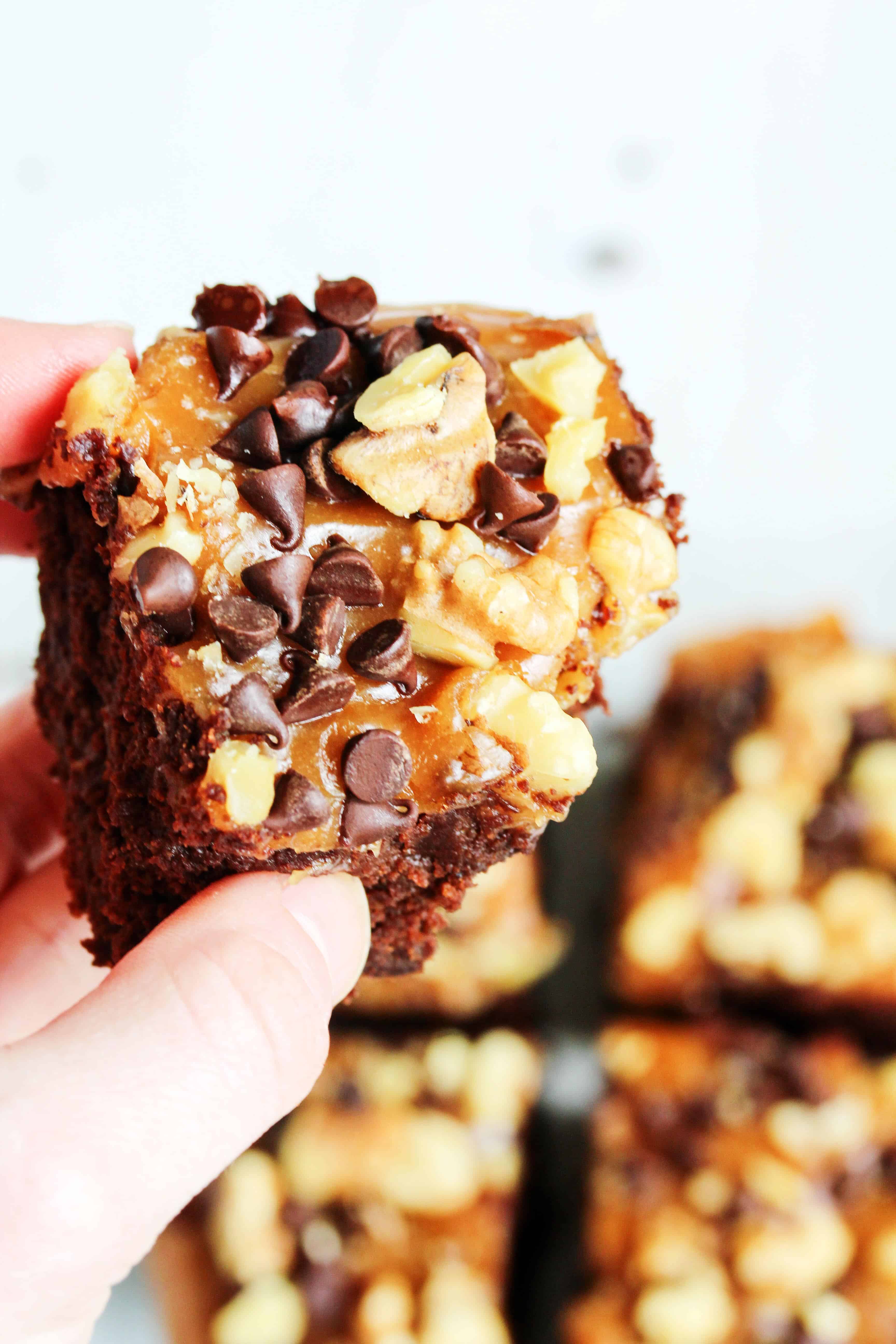 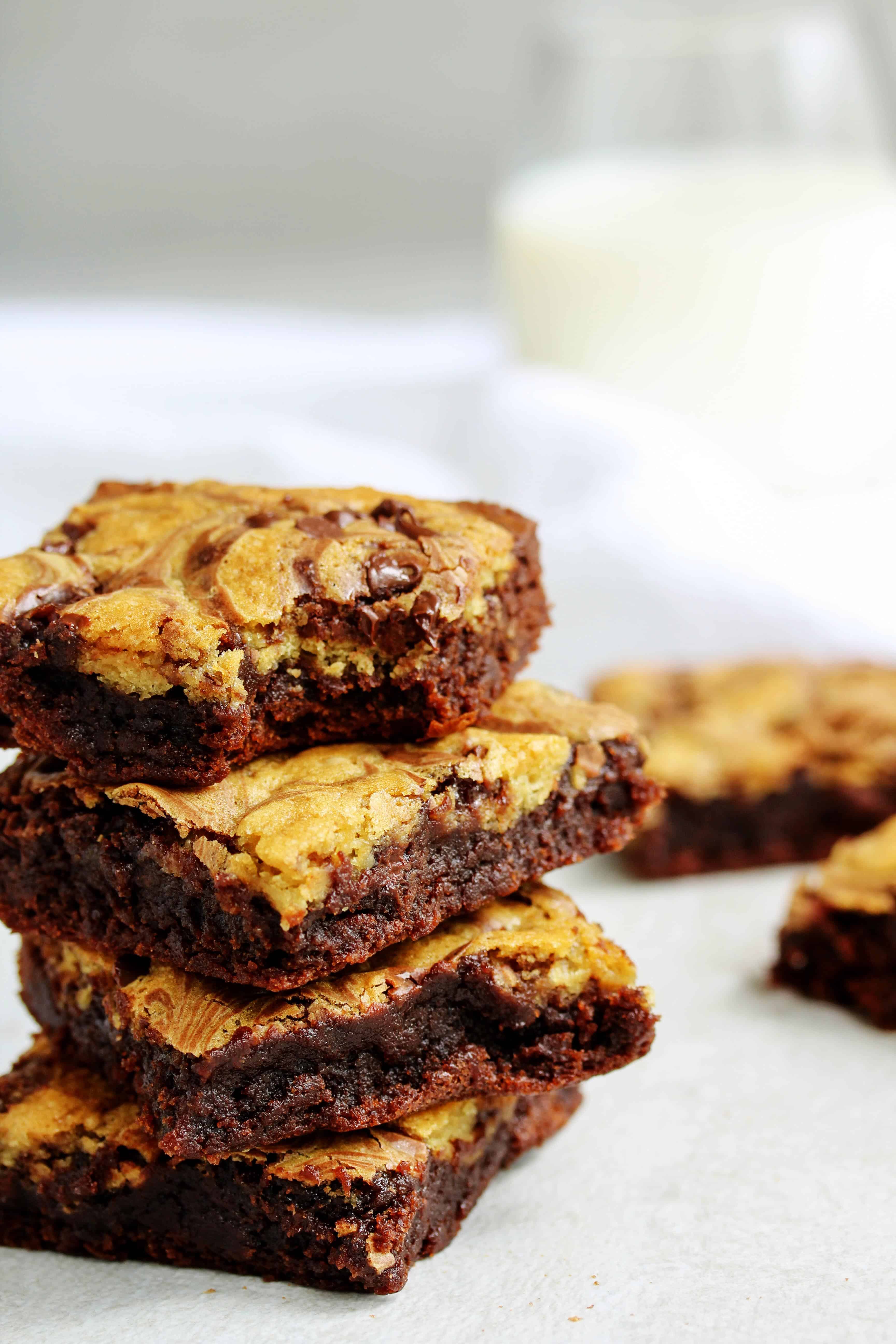 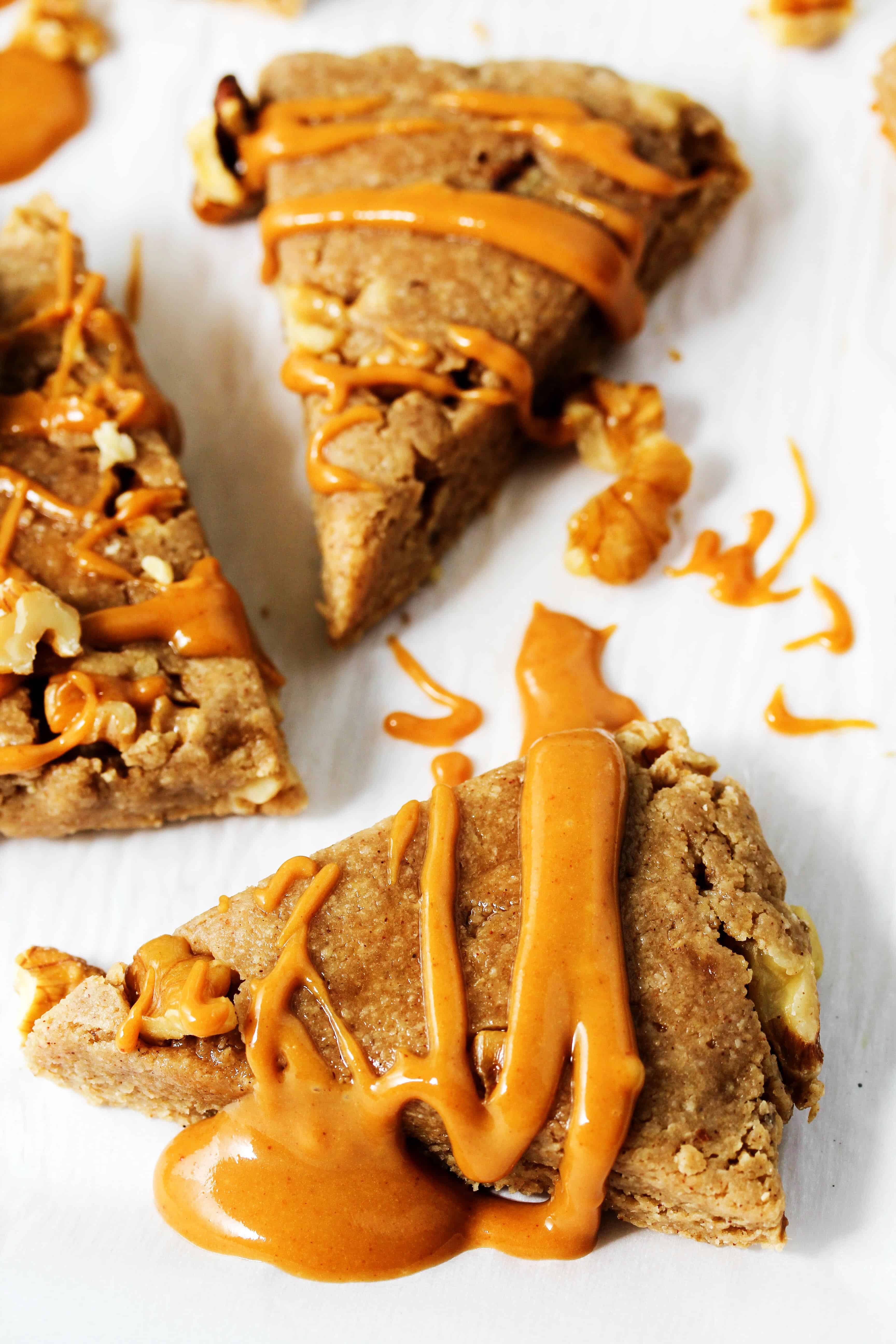 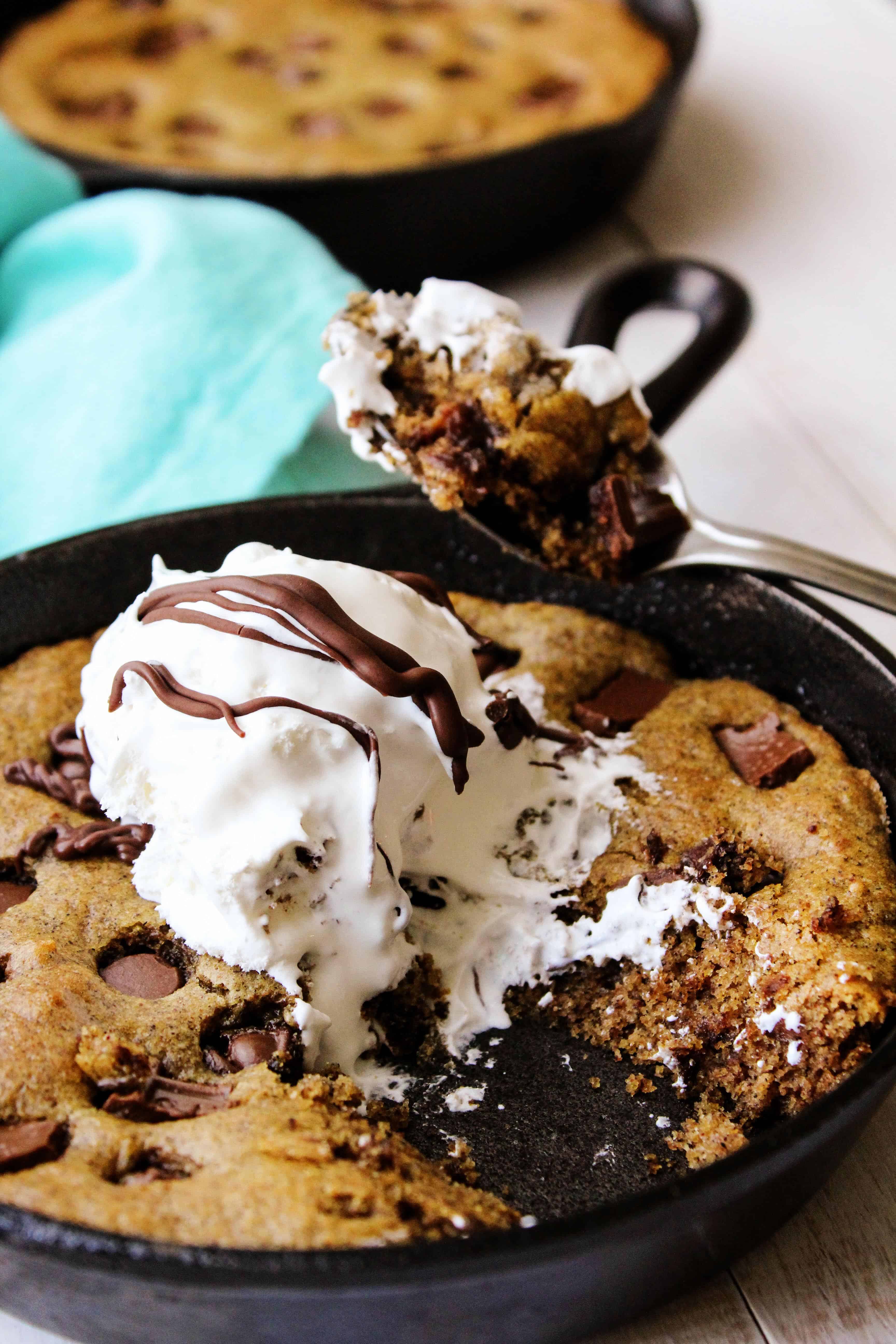 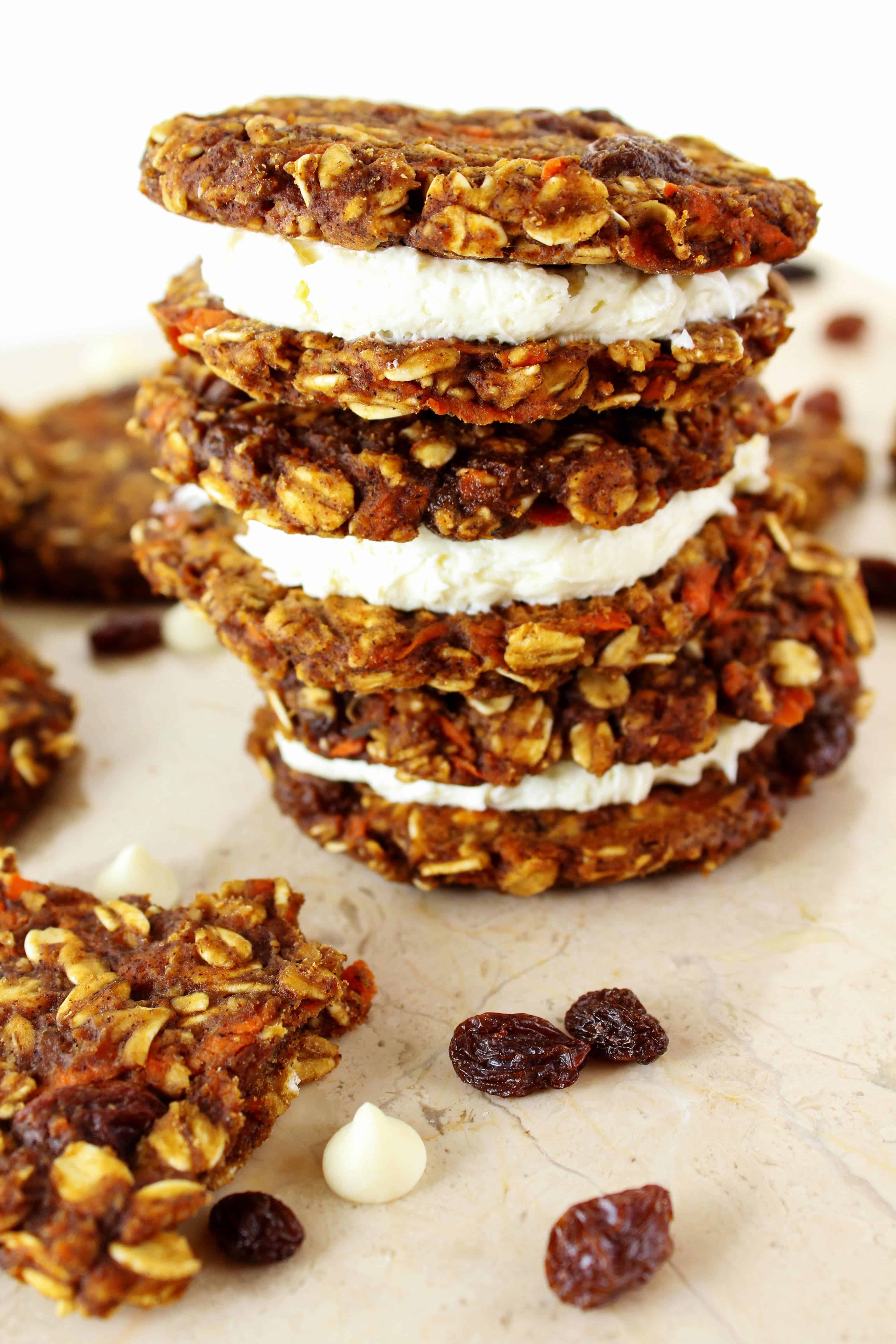 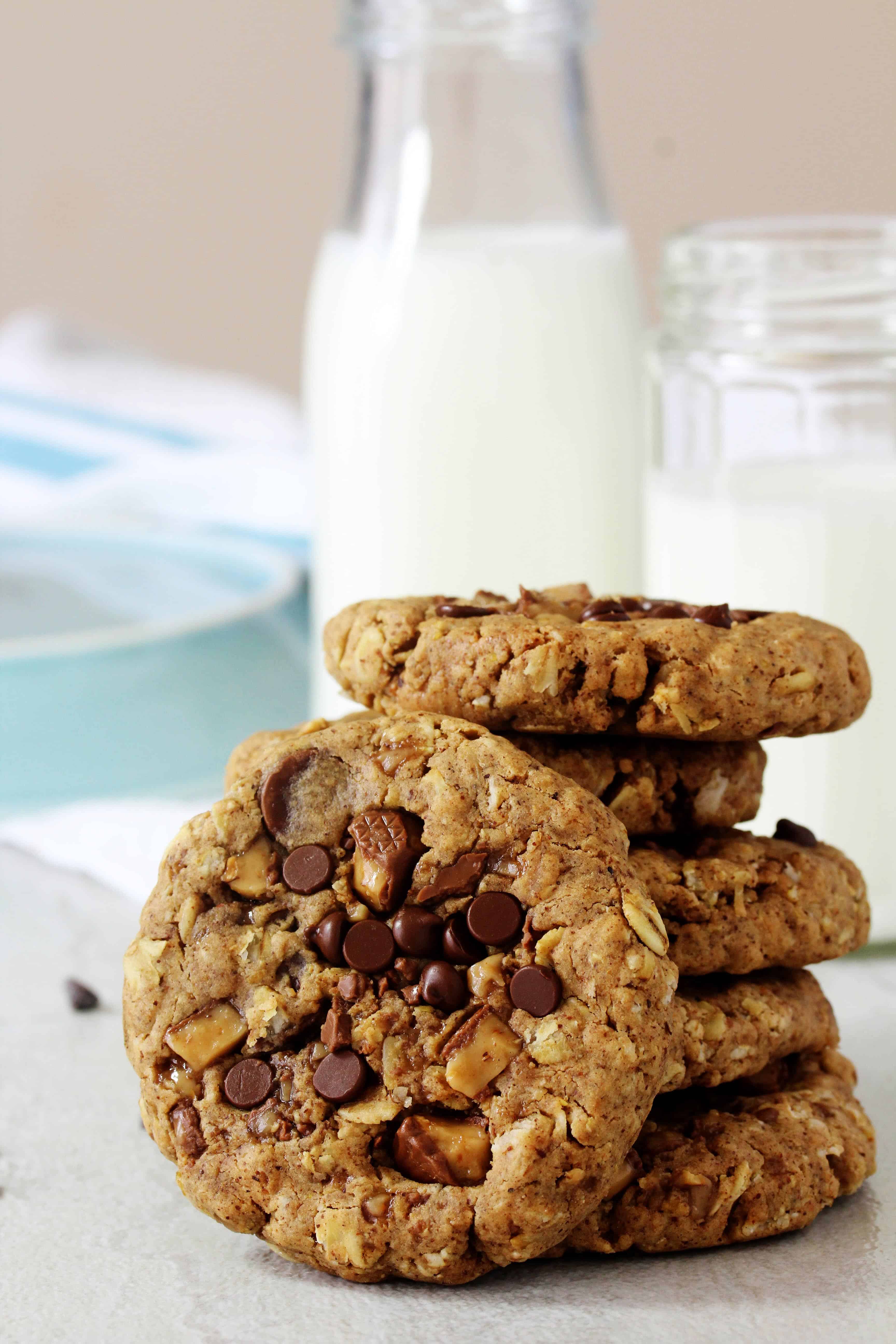